Packets of data travel from one destination to another through the network by transmission between routers.  The ping command reveals whether a destination is available, and how quickly it can be accessed.  The traceroute command reveals the path that packets of data traveled from one router to the next.  Each time a packet is sent from one router to another, that is considered a hop.  There are multiple paths that a packet can take to get to the same destination, depending on the routers that are available along the way.

On the other hand, the traceroute command told a different story.  The only traceroute that was successfully completed was for google.com.  Although I tried running the command multiple times for both amazon.co.uk, as well as amazon.ca, the commands always timed out before the information was received.  This result confused me, since a command timeout can indicate packet loss.  However, all of the pings were successful.  I’m not sure how to reconcile the difference in the results between the pings and the traceroutes other than hypothesizing that if the command were to have enough time to run, the traceroute would be completed successfully, but since the distance the packets have to travel is so far (geographically), the command times out before the packets can travel that distance.

Pings and traceroutes can be used to diagnose connection problems in a few ways.  A failed ping request may tell the user that the destination is not available.  In addition, the ping request can tell the user the speed at which packets are traveling.  A traceroute can tell the user the path through which packets are traveling.  If a user is not able to access a destination, they may run a traceroute to pinpoint where in the path the data is being lost.  Since the traceroute shows the routers associated with each hop, the specific router that is failing may be determined.  In some cases, running a ping or traceroute may even reveal that the connection problem lies in the original device.  Cases where a traceroute may timeout or a ping may fail include when the geographic distance traveled is too far, or if a destination server is down.

To view pings and trace routes, please click on the following link:
Pings and Traceroutes 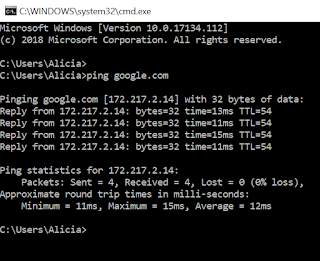 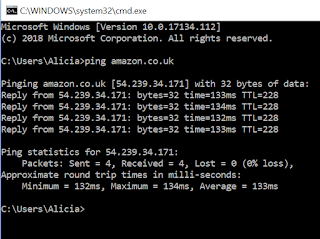 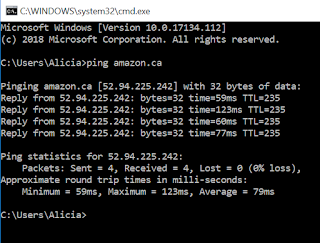 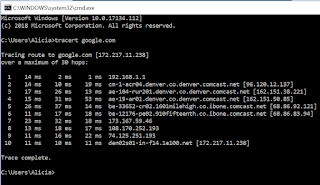 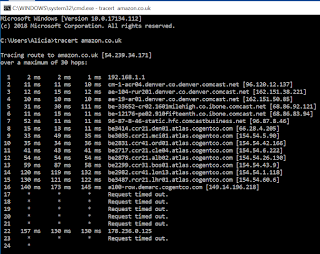 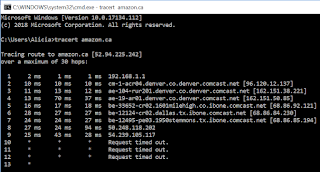 Science Nerd
Hi! I'm Alicia, and a full-stack software developer working towards a degree in Computer Software Technology from Ashford University. I have a Bachelor’s degree in Biology, which I used to teach middle school and high school science for 5 years. I also have a Master’s degree in Secondary Education (which allowed me to teach). After 5 years of teaching, I changed my career to software development because I love the challenge, creativity, and problem-solving involved!